Enough is enough #45!  There is little decency in this world.  Due to avoidance of facts and promotion of fiction.  This presidency has sparked a match in the hearts of haters.  We are now a country known for: stealing little children from their parents,  the mixing of church and state (with the mythical bible in the lead), womanizing,  misogyny, promotion of white supremacy…the list goes on and on. 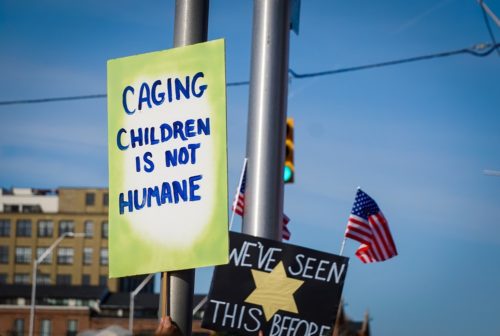 JUNE 14, 2018: A sign reads, “Caging children is not humane” at the protest to Keep Families Together in Detroit.Shutterstock

A hallmark of the Trump administration is that after manufacturing a self-inflicted crisis, it will do everything in its power to make it worse. Now the administration is stealing money from HIV programs so that it can pay for its loathsome policy of separating immigrants parents from their children.

Slate has obtained documents showing that the Office of Refugee Resettlement (ORR) is already diverting funds from the Ryan White HIV/AIDS Program to cover a budget shortfall caused by the separation policy.

ORR is projecting that it will need as many as 25,400 beds for minor children by the end of the current year. That would result in a $585 million deficit by the end of September, when the government’s fiscal year ends, and a nearly $2 billion shortfall by the end of next year.

The reason why ORR can grab money from the Ryan White Program is that the agency is part of Health and Human Services. ORR is also looking to take money from refugee settlement programs, including medical assistance and help for torture victims. ORR is headed by Scott Lloyd, an anti-abortion activist who also has a track record of homophobia.

The ORR projections apparently mean one of two things, neither of them good, or a combination of the two. It could signal that the Trump administration is going to rev up its zero tolerance policy and start separating chidren again after a 20-day waiting period has passed.

Trump’s executive order halting the separations is unclear on this point, although the outcry that forced Trump to change course would return with a vengeance if zero tolerance returned.

The other possibility is that ORR is expecting to be holding on to children for a lot longer than people think. Although a judge has ordered the administration to reunite children and parents as quickly as possible, the administration has been pleading for more time. An estimated 1,700 children are currently in government custody after being separated from their families at the border.

ORR’s move is entirely in character with the Trump administration’s disrespect for HIV issues. Last December, the administration fired its entire HIV/AIDS Presidential Council. Trump’s attack on Obamacare have also paved the way for insurers once again to charge more for people with pre-existing conditions, like HIV.

Still, it takes a certain kind of evil genius to combine cuts to HIV programs and tearing children away from their parents. Unfortunately for us, the Trump administration has a special talent for it.