The malcontent of American politics would dissipate if there were not such a need to place people in a box!

1- Do not feel absolutely certain of anything.
2- Do not think it worth while to proceed by concealing evidence, for the evidence is sure to come to light.
3- Never try to discourage thinking for you are sure to succeed.
4- When you meet with opposition, even if it should be from your husband or your children, endeavor to overcome it by argument and not by authority, for a victory dependent upon authority is unreal and illusory.
5- Have no respect for the authority of others, for there are always contrary authorities to be found.
6- Do not use power to suppress opinions you think pernicious, for if you do the opinions will suppress you.
7- Do not fear to be eccentric in opinion, for every opinion now accepted was once eccentric.
8- Find more pleasure in intelligent dissent than in passive agreement, for, if you value intelligence as you should, the former implies a deeper agreement than the latter.
9- Be scrupulously truthful, even if the truth is inconvenient, for it is more inconvenient when you try to conceal it.
10- Do not feel envious of the happiness of those who live in a fool’s paradise, for only a fool will think that it is happiness.” 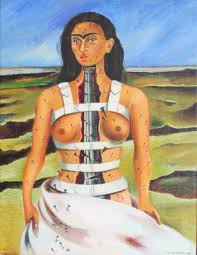 The pattern of her life…nothing short of amazing.  Her personal story…nothing less than a benchmark, in which, female artist everywhere: can use as their own private badge of courage.

Simply put, women are known for stifling their tragedies…so that others may endure.  Thus, it would appear, that female artists more likely to hide that special ‘fear’…cautious to let it out.

But…as we grow, from the inside out…The art becomes all the more convincing and enticing!

Artist Frida Kahlo was born on July 6, 1907, in Coyocoán, Mexico City, Mexico. Considered one of Mexico’s greatest artists, Frida Kahlo began painting after she was severely injured in a bus accident. Kahlo later became politically active and married fellow communist artist Diego Rivera in 1929. She exhibited her paintings in Paris and Mexico before her death in 1954.

Around the age of 6, she contracted polio, which caused her to be bedridden for nine months. While she did recover from the illness, she limped when she walked because the disease had damaged her right leg and foot. Her father encouraged her to play soccer, go swimming, and even wrestle — highly unusual moves for a girl at the time — to help aid in her recovery.
After staying at the Red Cross Hospital in Mexico City for several weeks, Kahlo returned home to recuperate further. She began painting during her recovery and finished her first self-portrait the following year, which she gave to Gómez Arias. Becoming more politically active, Kahlo joined the Young Communist League and the Mexican Communist Party.
Soon she found comradely in and with Carlos Rivera.  Rivera, an artist and political activist.
Tumultuous MarriageKahlo reconnected with Rivera in 1928. He encouraged her artwork, and the two began a relationship. The couple married the next year. During their early years together, Kahlo often followed Rivera based on where the commissions that Rivera received were. In 1930, they lived in San Francisco, California, where Kahlo showed her painting Frieda and Diego Rivera at the Sixth Annual Exhibition of the San Francisco Society of Women Artists. They then went to New York City for Rivera’s show at the Museum of Modern Art and later moved to Detroit for Rivera’s commission with the Detroit Institute of Arts.

In 1932, Kahlo incorporated more graphic and surrealistic elements in her work. In her painting, Henry Ford Hospital (1932), a naked Kahlo appears on a hospital bed with several items — a fetus, a snail, a flower, a pelvis and others — floating around her connected to her by red, veinlike strings. As with her earlier self-portraits, the work was deeply personal, telling the story of her second miscarriage.

Kahlo and Rivera’s time in New York City in 1933 was surrounded by controversy. Commissioned by Nelson Rockefeller, Rivera created a mural entitled Man at the Crossroads in the RCA Building at Rockefeller Center. Rockefeller halted the work on the project after Rivera included a portrait of communist leader Vladimir Lenin in the mural, which was later painted over. Months after this incident, the couple returned to Mexico and went to live in San Angel, Mexico.

Never a traditional union, Kahlo and Rivera kept separate, but adjoining homes and studios in San Angel. She was saddened by his many infidelities, including an affair with her sister Cristina. In response to this familial betrayal, Kahlo cut off most of her trademark long dark hair. Desperately wanting to have a child, she again experienced heartbreak when she miscarried in 1934.

She and Rivera went through periods of separation, but they joined together to help exiled Soviet communist Leon Trotsky and his wife Natalia in 1937. The Trotskys came to stay with them at the Blue House for a time in 1937 as Trotsky had received asylum in Mexico. Once a rival of Soviet leader Joseph Stalin, Trotsky feared that he would be assassinated by his old nemesis. Kahlo and Trotsky reportedly had a brief affair during this time.

In 1939, Kahlo went to live in Paris for a time. There she exhibited some of her paintings and developed friendships such artists as Marcel Duchamp and Pablo Picasso. She divorced Rivera later that year. During this time, she painted one of her most famous works, The Two Fridas (1939). The paintings shows two versions of the artist sitting side by side, with both of their hearts exposed. One Frida is dressed nearly all in white and has a damaged heart and spots of blood on her clothing. The other wears bold colored clothing and has an intact heart. These figures are believed to represent “unloved” and “loved” versions of Kahlo.

In 1944, Kahlo painted The Broken Column, which depicted a nearly nude Frida split down the middle revealing her spine as a shattered decorative column. She also wears a surgical brace and her skin is studded with tacks or nails. Again, Kahlo shared her physical challenges through her art. Around this time, she had several surgeries and wore special corsets to try to fix her back. She would continue to seek a variety of treatments for her chronic physical pain with little success.
Deteriorating Health and Death
Her health issues became nearly all-consuming in 1950. After being diagnosed with gangrene in her right foot, Kahlo spent nine months in the hospital and had several operations during this time. She continued to paint and support political causes despite having limited mobility. In 1953, Kahlo received her first solo exhibition in Mexico. She may have been bedridden at the time, but she did not miss out on the exhibition’s opening. Arriving by ambulance, Kahlo spent the evening talking and celebrating with the event’s attendees from the comfort of a four-poster bed set up in the gallery just for her. Kahlo’s joy was dampened a few months later when part of her right leg was amputated to stop the spread of gangrene.Deeply depressed, Kahlo was hospitalized again in April 1954 because of poor health, or, as some reports indicated, a suicide attempt. She returned to the hospital two months later with bronchial pneumonia. No matter her physical condition, Kahlo did not let that stand in the way of her political activism. Her final public appearance was a demonstration against the U.S.-backed overthrow of President Jacobo Arbenz of Guatemala on July 2. About a week after her 47th birthday, Kahlo died on July 13 at her beloved Blue House. There has been some speculation regarding the nature of her death. It was reported to be caused by a pulmonary embolism, but there have also been stories about a possible suicide.##www.biography.com/people/frida-kahlo

Whether the suicide attempt be real or not.  A woman’s perseverance is obvious with Frida.  A woman’s instinctual ability to place her anger, fear, pain and suffering in things other than violence…obvious thru Frida Kahlo.

Motivation and inspiration is our vision as it is the key to success. In this Blog we will assist you in SEO, Amazon Affiliate Marketing, and Blogging Tips.