Take Me to Church

My lover’s got humor.  She’s the giggle at a funeral.  Knows everybody’s disapproval.  I should have worshiped her sooner!
If the heavens ever did speak.  She’s the last true mouthpiece.  Every Sunday’s getting more bleak.  A fresh poison each week.
We were born sick,”  you heard them say it!
My church offers no absolutes.
She tells me, “worship in the bedroom.”
The only heaven I’ll be sent to…Is when I’m alone with you.
If I’m a pagan of the good times?  My lovers the sunlight.  To keep the Goddess on my side.  She demands a sacrifice!
Drain the whole sea.  Get something shiny.  Something meaty for the main course.  That’s a fine-looking high horse.  What you got in the stable?  We’ve a lot of starving faithful.
That looks tasty.  That looks plenty.  This is hungry work.
No Masters or Kings.  When the ritual begins.  There is no sweeter innocence than our gentle sin.  In the madness and soil of that sad earthly scene…
only then I am human
only then I am clean.
Take me to church.  I’ll worship like a dog at the shrine of your lies.  I’ll tell you my sins and you can sharpen your knife.  Offer me that deathless death.  Good god, let me give you my life.
##Andrew Hozier 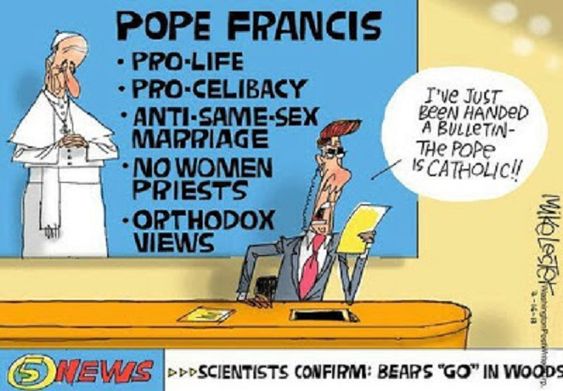 What a silly notion?  As far as I recall, the beating of bats on pavement in a vacant parking lot…the chatter and laughter behind cupped hands…and, the look of judgment and ridicule; Are not fashionable decisions!

Coming Out as, gay, bi, tri, trans, etc., is the most possibly destructive spiritual… decision one can make!

Pope Francis is “concerned” about what he described as the “serious issue” of homosexuality, saying in an interview published Saturday that being gay was a “fashion” to which the clergy is susceptible.

“The issue of homosexuality is a very serious issue that must be adequately discerned from the beginning with the candidates,” the pontiff said with regards to would-be priests.

“In our societies it even seems that homosexuality is fashionable and that mentality, in some way, also influences the life of the church,” he says in the book ‘The Strength of a Vocation’, released in Italy on Saturday.

“This is something I am concerned about, because perhaps at one time it did not receive much attention,” he said in the book, a transcript of an interview which will be released in ten languages.

The Roman Catholic Church’s position is that homosexual acts are sinful and the pontiff’s stance on homosexuality in the clergy is not new.

A decree on training for Roman Catholic priests in 2016 stressed the obligation of sexual abstinence, as well as barring gay men and those who support “gay culture” from holy orders.

The barring of people who present homosexual tendencies was first stipulated by the Catholic Church in 2005.

“It can happen that at the time perhaps they didn’t exhibit [that tendency], but later on it comes out,” Francis said.

“In consecrated and priestly life, there’s no room for that kind of affection. Therefore, the Church recommends that people with that kind of ingrained tendency should not be accepted into the ministry or consecrated life.

“The ministry or the consecrated life is not his place,” the Argentine added.

Gay clergy were urged to be “impeccably responsible” in a warning over bad behaviour that was notable for its silence on heterosexual clergy who break their vow of celibacy.

We “have to urge homosexual priests, and men and women religious, to live celibacy with integrity, and above all, that they be impeccably responsible, trying to never scandalise either their communities or the faithful holy people of God.

“It’s better for them to leave the ministry or the consecrated life rather than to live a double life,” Francis said.

In 2013, just months after assuming the papacy, Francis said: “If someone is gay and is searching for the Lord and has good will, then who am I to judge him?”, signifying a softer tone on homosexuality.

Papered the stall with all.

All that is witty and wise.

Left the lid up to all the nonsense bought while watching fame rise.

inches from a disabled reach.

These are the actions of a sightless woman willing to see.

Full knowing with glasses on…she is ill equipped to preach.

Supposing she mistook a tempered stone for gold.

Supposing in an enchanted forest,

there had been castaway quests to understand.

Suppose in the dark, she shall never share her travel plans.

In our every deliberation, we must consider the impact of our decisions on the next seven generations. – Iroquois Maxim (circa 1700-1800)

Humankind has not woven the web of life. We are but one thread within it. Whatever we do to the web, we do to ourselves. All things are bound together. All things connect. -Chief Seattle

Hold on to what is good,
Even if it’s a handful of earth.

Hold on to what you believe,
Even if it’s a tree that stands by itself.

There are many Hallmark  NOT holidays!   For example, very few know that it is that year of Family Farming and Small Island Development Status.  Suppose those who plan on growing a batch of down home lean, green and newly approved Ganja in say, Bishop’s Rock, the British Isles, are very happily allowing their family fortune go up in smoke.

However, an even smaller event has taken place

Saturday, the 8th of March is also known as

Belly Rub day.  Belly rubbing has been around for centuries.  Cats have been fully aware of the benefits this leisurely stroke can produce and are only now willing to give up the secret ingredient.  Spay bellies!  A spay belly and/or ‘the belly dancer’s belly’ is best for giving a good belly rub.

Belly rubs are harmless.  Good for the cardio vascular system and known to be infectious.  Once a belly has been rubbed…animals, your own or strays, will come from miles around to receive this precious gift.

News has also spread about the NSA’s new tool for being tools!  There has been a secret research facility discovered in the barren wasteland known as Franklin, New Hampshire.  Here many of the world’s top dog trainers have been seen educating the shelter dog to be receptive to strange and unusual behavior amongst their soon to be adoptive parents.

These animals are sly and cunning and often will seem to following you into the most of mundane places.  Such as, the garage, the back of the walk-in closet and the bathroom.

It had been said that ‘kiss my ass’ is a layman’s term for:

I’ve had enough of you.  Get the fuck out of my face!

Orange Tabby’s have now come out of the closet to years of hidden white lies.  Tabby’s are now gathering from near and far.  Small towns, little burghs and large metro areas are being infested with the cat’s tail!

‘When we turn and place our ass in your face.  It is not a sign of trust.  It is not a promise of ‘possible companionship.  It is in fact, our way of telling you humans to ‘not shit where you eat’.  In  other words, get your ‘lack of a loving childhood love’ else where.  Do we look like your Momma?  Do we look like we are your therapists?  If we’re kickin’ back.  Eyes closed.  Turned on and tuned into the moment.  Leave us the fuck alone. Go listen to Katy Perry, drink a glass of wine and call someone who cares.”

*above statement translated by Jackson, I don’t know shit ’bout cats but it pays the bills, Galaxy

Lastly, on the News from the Zen Cat-

If two people-a couple-really feel that way is more practical, more sort of satisfaction, both sides fully agree, then okay

Yo, Dalai, all we need is love-