If there is a battle
I hope my head always defers to my heart
-T. Chapman

Moments worth capturing…yet, set so

you wonder about the state of your heart.

A corner curls just a trifle from the far reaches of her parted lips.

A nuance clutches your breathing.

Something that never was…

Something that did not always fit.

Though it was not yours, you watch it, well lit.

Even if it is somebodies love you did not know.

It was someone’s else love to have and to hold.

When I write.  I do not write for too many reasons.  There are pretty, and basic.  They are ugly, and unmentionable.

I struggle with life.  I maneuver around love as though, I know nothing at all of the poetry found in someone’s heart.

Did I have mentors?  Had I been asked twenty some odd years ago, I would have egotistically said,

My grammar has no design.  My sentencing filled with errors.  As if, I had no formal education.

In hindsight, my heroes and/or heroines, were/are, coarse in the middle like a pricker bush on the way to the beach.  They are unsung.  They are aloof.  They are similar to myself in that…

I write.  They write.  I create.  They create.  For no one…but myself.

In a nutty-shell, my major had been psychology and minor had been, business management.  However, I had been an English tutor.   Hence, the ‘random’ in the randomwordbyRuth.

Whilst drinking, and drugging thru the halls of an all women’s college.  Three people stand out…As they have for the last 25 years of my life.

Professor Buiso?  An English professor who never tenured due to his drinking and his womanizing.  I would have called it, teen girl-izing.  For the grungy failed short story writer (turned teacher) liked to educate behind the walls of his corner office…with the doors shut.

What I remember most about the good, non-doctored, Mr. Buiso?  His nails stained yellow from smoking too many cigarettes.  His cheap taste in cheap scotch.  His ability to turn disheveled and make it sexy and readable.

The heroine of my writing history?  Tracy Chapman!  Quiet, meaningful and characteristically unaware of her artistic beauty.

I spent countless weekends.  Hitching down to Cambridge Square.  Sitting with a James Dean edge at the water fountain right outside…Cambridge Station.

In solace and on acid.  Three years were spent awaiting Tracy to arrive.  As she had been rumored to do.  Three years spent heading home…empty handed.

Lastly, Cornish, New Hampshire.  J.D. Salinger!  A recluse.  An author.  A writer with beauty in word and disgust for humankind, in heart.

My childhood sucked.  My young adult life?  Not any better.  With little fanfare, I can say,  I ran through the trauma and the drama, via the written word.

It is important to have heroes!  It is of utmost importance, to find your art.

Sometimes the most important person to impress with your self expression…is yourself!

Salinger shifted the entire focus of his life to the cabin in the woods, staying there for up to two weeks at a time, burning wood in his stove to heat up the cans of food or meals brought to him by Claire or their children.

One remark he made at this time to his ten-year-old daughter expresses much of his attitude to women. After a quarrel he told her: ‘We’d better find a way to make up because when I’m through with a person  –  I’m through with them’.

…a silence he explained himself with words that could be his epitaph: ‘I like to write. I love to write. But I write just for myself and my own pleasure.’

If there is a battle
I hope my head always defers to my heart
-T. Chapman

Moments worth capturing…yet, set so

you wonder about the state of your heart.

A corner curls just a trifle from the far reaches of her parted lips.

A nuance clutches your breathing.

Something that never was…

Something that did not always fit.

Though it was not yours, you watch it, well lit.

Even if it is somebodies love you did not know.

It was someone’s else love to have and to hold.

Every week come rain or snow.  Every thought filled with curious defiance and erupting disdain.  That is the life of a fledgling writer.  A camouflaged walking molecule hoping to be mistaken for everyone else. 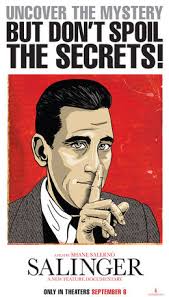 But of course, Seymour had been what an old hippie had been looking for.  See more Glass meant there would be no Me, no You and certainly nothing anyone could point a finger at.

I supposed if Seymour were real, as though, he weren’t!  He would have lived an anti life.  Tucked away on barren dirt roads leading to a worn down chapel in the town square.  Living one street back in a bungalow structured on the backs of Poe, Wolfe, Plath and Vonnegut.

Within the darkened streets of nowhere, for the is never light at the end of an endless tunnel; our author, our best friend and the person with whom we share nods with…lives amongst the written word and the unspoken truth.

Once I had my confusion straight:

I had consumed Salinger’s being as best I could.

Oh, I searched for him, like a Cornish game hen loves the hunt.  I took the low roads of New Hampshire.  Passing Tracy Chapman at Harvard Square I circled parts unknown to normal.  Tracy would have just told me to go home.  J.D. would not be found in the city.  And, her song was not mine to sing.

Recluse on the loose?  Perhaps?

Mr. Salinger evaded my attempts to lure him with my resume:

Cook at a dude ranch in Montana

No one is famous really until they die.  At least, not in the unfashionable art world.  I bide and hide my time.  Lumbering amongst the masses and blending in like the flannel many.  Waiting for his approval of my disappearance.  Hunkering down with Seymour Glass.

Anyway, I started bitching one night before the broadcast. Seymour’d told me to shine my shoes just as I was going out the door with Waker. I was furious. The studio audience were all morons, the announcer was a moron, the sponsors were morons, and I just damn well wasn’t going to shine my shoes for them, I told Seymour. I said they couldn’t see them anyway, where we sat. He said to shine them anyway. He said to shine them for the Fat Lady.”
― J.D. Salinger, Franny and Zooey